The Beginning of the Pacific Highway

The Pacific Highway is 1,687 miles long and stretches from the Mexican border to the Canadian border and in 1924, was the longest continuous stretch of paved road in the world. Good roads advocate and road-building pioneer Sam Hill was perhaps the main motivating force behind building of the highway as a "National auto trail" along the West coast of the United States.

The basic idea of a trunk line road began in the late 1800's as a way to furnish a direct line of travel from the farming regions to the markets. The farm to market road as they were once called, were built in a direct line as much as possible to minimize the loss of time and money. The old system of elbow-joints that forced the traveler to zigzag would be avoided as much as possible. The trunk road was to accommodate travel whether by foot or by team, auto, bicycle or trolley. It was to be passable at all times of the year and in all types of weather. The trunk road was to be a grand thoroughfare and was to be built not only for the present generation, but for those who are to come later.

On December 10, 1912, ex-Governor of Vermont G. H. Prouty, gave the Portland Oregonian an interview. Prouty was a leading National figure in the fight for better highways. "Trunkllne roads are the only solution of the good roads problem," commented Mr. Prouty, who was one of the many Eastern men intensely interested in the Pacific Highway project. "In order to get a comprehensive network of roads, first you must build the trunk lines and later the laterals and feeders. The latter will come more quickly than is supposed, after, of course, the main roads are built."

The state highway department first mentions a north-south trunk highway through Washington in the First Biennial Report of the State Highway Commissioner, printed on November 15, 1906;

"Much has been said and written regarding an improved highway extending across the state from Blaine on the British line to a point on the Columbia river. That such a highway should be built appears to be beyond dispute, but to this should be added a north and south highway in Eastern Washington from the British line to the south boundary of Walla Walla county, and an east and west highway from Puget Sound to the Idaho line."

"With the proper preliminary engineering to determine the best routes and probable cost of construction, the Legislature would be able to determine the feasibility and desirability of this project. It is doubtful if the state could enter upon a project which would eventually be of greater profit to its people."

In 1910, the Third Biennial Report of the State Highway Commissioner proposed 10 new state highways to be constructed. One of these proposals was; "A north and south trunk road, beginning at the city of Blaine in Whatcom county, thence southerly by the most feasible route through the principal cities of the Sound to the city of Vancouver in Clark county. Survey parties are now in the field establishing the most feasible location of this road. I would respectfully suggest that the route be established as described, with the possible exception of the section from Bellingham north. A survey is now being made to determine the relative merits of the Blaine and Guide Meridian roads, and the data obtained will be presented to the legislature at this session."

The story of the Pacific Highway is the story of a road and a motive; On Monday September 18, 1910 a group of men from the three states bordering the Pacific ocean met at the Arctic club in Seattle and formed an association with the object of promoting and establishing a trunk highway, which should begin as far north as possible and extend as far south as possible on the Pacific Slope. These men knew that in every state the history of the railroads began with the binding of a great artery; that in due course came the construction of lateral and feeders, and of more main lines with more branches and connections.

They believed that if a great north and south road could be selected and improved, it would be made famous and become a popular route of travel. The moral effect of such an achievement would be promptly seen, and that the people of the West would be aroused to the need and be stimulated with the desire for more good roads. There was no better incentive to hasten the building of better roads than to show the success of one good road.

The Association proceeded to select sections of roads, already built between Tijuana and Vancouver BC. They tied them together, gave the developing highway a name and admirably marked it with uniform signs of simple, strong design. The result was electrical! The interest and pride of the states and provinces through which the road passes was immediately displayed. It caught the fancy and favor of the press and commercial bodies. It appealed to the imagination of the East and Middle West and the project was pictured and described in practically every motor and tourist magazine, and in many of the farm periodicals.

The province of British Columbia, which had amazed the world with its recent achievements in road building, was prompt to recognize and approve the project. It had appropriated funds to extend the Pacific Highway from Vancouver BC northward 500 miles north to Hazelton, and it was proposed to carry the highway on over the 80 intervening miles west to Alaska. In Washington, the signs were first placed, and $10,000 was spent on surfacing sections of the road and preparing maps and other data. The road had received much attention by state and county authorities.

Frank B. Riley of Portland, who followed the highway signs from the Columbia river north through Washington and across the Canadian border said this about the trip; "I found the road everywhere the object of much concern, and found farmers working on the road in front of their lands individually and independent of any state or county assistance."

At a convention held in Portland during August of 1911, it was decided to mark the Pacific Highway through Oregon from the Columbia river ferry to the California border. M. C. Dickinson undertook to finance and become responsible for the manufacturing and placing of the signs. The work was started September 9, 1911 and finished on September 14th. The progress of the crew southward assumed the aspect of a presidential tour.

At every county line they were met by delegations of city and county officials along with many citizens who escorted the sign placing crew across their county. In the larger towns public receptions and banquets were the order. When they were finished, 600 signs marked the Pacific Highway across Oregon, allowing tourists to go from Vancouver BC to the California border without a guide book.

California had authorized the expenditure of $15,000,000 on roads. Governor Johnson said that the Pacific Highway from California to the Mexican border will receive immediate attention and would be in first class condition by 1913. He finished by saying that; "We may look for a continuous procession of tourists passing up and down the great road and diverging over its laterals and seeing the country as only it can be seen from the common road.

In 1912 the Fourth Biennial Report of the State Highway Commissioner made another recommendation for a north-south trunk highway; "I recommend that certain state roads already established, be extended as indicated on the map of state roads accompanying this report. The most important addition to a proper system of state roads should be a north and south trunk road from Blaine to Vancouver, to be known as the Pacific Highway, or State Road No. 6. Such a road traversing nine counties containing 48% of the wealth and population of the entire state, passing through nine county seats and the state capital, would be for the general good."

"This road would follow county roads already established, with a few exceptions. For about 2/3rds of the 350 miles from Blaine to Vancouver, the road may be considered a fairly good road, but the other 1/3rd, about 120 miles, needs reconstruction. Every one of the nine counties has done permanent work on this road. King County has expended no less than $600,000 on the Pacific Highway, and Pierce has expended and contracted for over $300,000 worth of construction, and the other counties have done proportionately well. The steel bridges being erected across the Skagit and Lewis Rivers will eliminate the last ferry on this road. I recommend that the Pacific Highway be given generous consideration."

In 1914, the Fifth Biennial Report of the State Highway Commissioner said this about the new highway; "The Pacific Highway is the North and South trunk road for Western Washington. This highway, beginning as it does at the international boundary at Blaine, Washington, passes through the principal cities of Western Washington to the Oregon line, traverses nine counties containing 48 per cent of the wealth and population of the entire State and passes through nine county seats and the State Capital."

"With few exceptions, the route of the Pacific Highway follows county roads already established, and may be considered a fairly good road with the exception of about 90 miles, which is in need of reconstruction. All of the nine counties are doing Permanent Highway work on this road. From Blaine the Pacific Highway connects with the main trunk roads of British Columbia, and from Vancouver the highway extends on under the same name to Portland, and thence south through the States of Oregon and California to the Mexican boundary."

On July 1, 1964, US Highway 99 started to be phased out, as the construction of Interstate 5 was nearing completion. In 1968, the freeway was finished and US Highway 99 was decommissioned.

History, as it lies at the root of all science, is also the first distinct product of man's spiritual nature; his earliest expressions of what can be called thought. - Carlyle 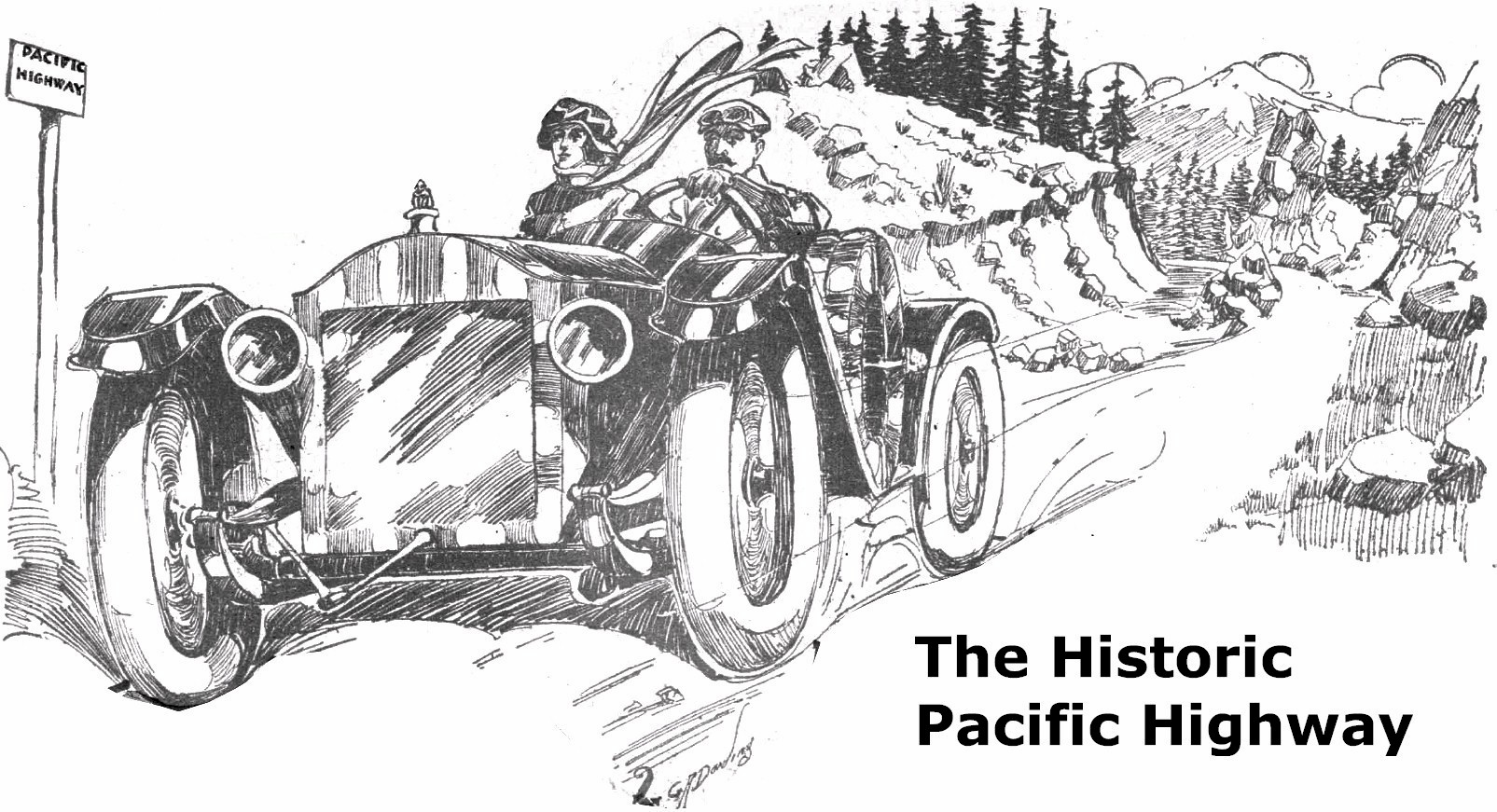 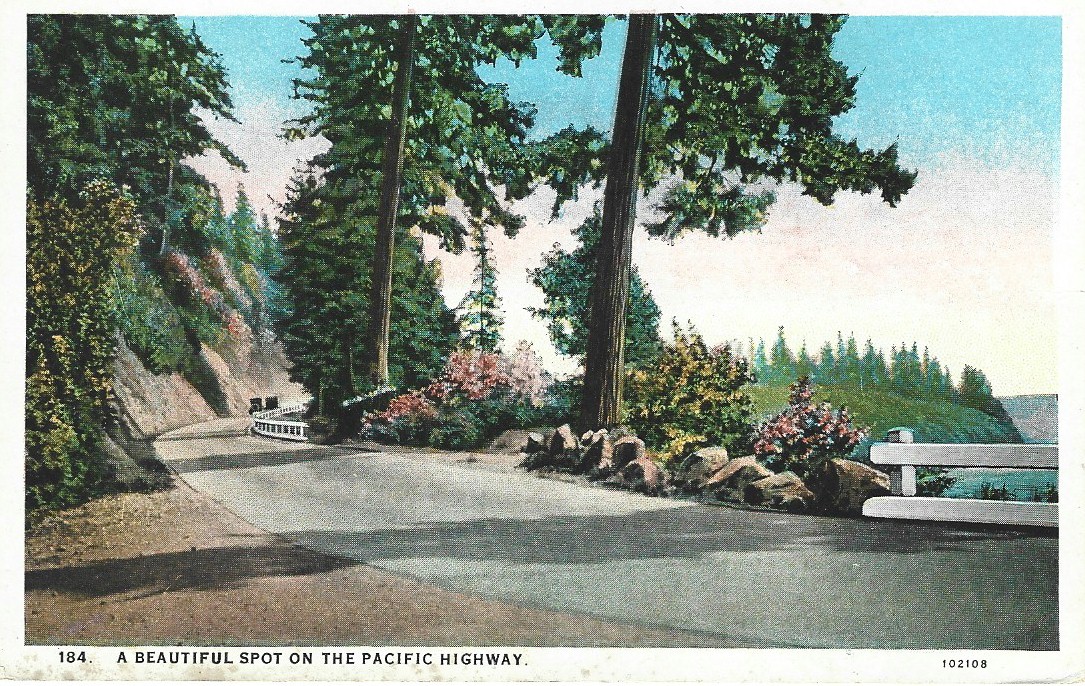 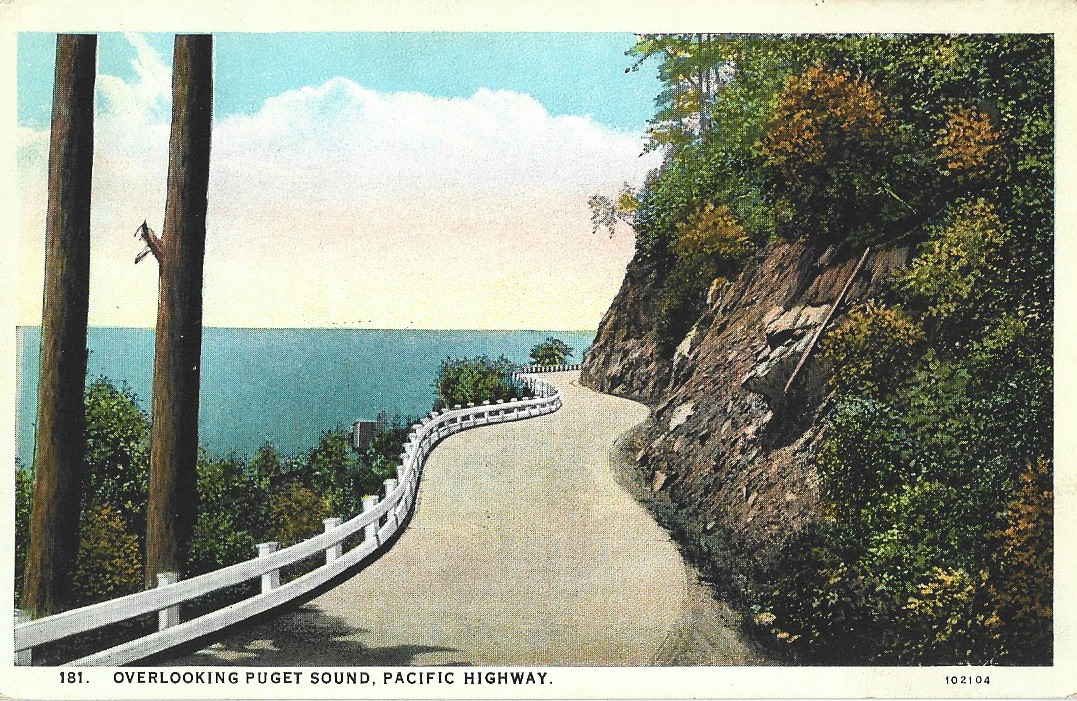